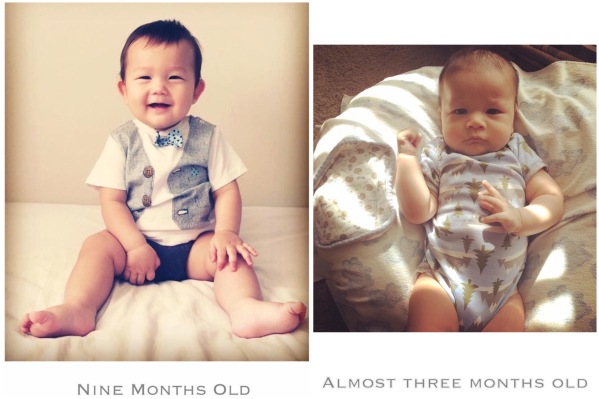 Oh friends. I feel like the only time I post has been during moments of crisis. Life has been very very busy with these two. It has been a month since my last update, and there have been some awesome weeks, but recently we’re in a shitty week. I’ll recap. Last month Dumplin’ started refusing the boob, and then went on a full-on nursing strike for 10 days thanks to Hand-Foot-Mouth (Coxsackie virus). I was heartbroken but pumped to keep my supply going, and then once he was over the Coxsackie virus, we had to trick him back to nursing, using nipple shields and side-lying nursing positions. He is still nursing now, but only once or twice during the day, at bedtime, and twice overnight (because it’s the only time i can get him to nurse for a full-session). He’s refusing to nurse before naps and after naps, so he’s essentially dropped 3-4 nursings that we used to do before the illness. I’m pretty upset about it. It feels super shitty when your baby pushes you away and cries when you try offering him the one thing that used to soothe him. We were at a Mother Goose sing-along class today and I was talking to other moms with babies around the same age or a little older, hoping to find some camaraderie but none of the 3 moms were experiencing the weaning. They were shocked that I was going in and nursing him when he was sleeping, since they all are wanting their babies to sleep though the night. I explained that if I didn’t nurse him at night, he would essentially never get any fluids since he also isn’t drinking a lot from a bottle or with food.

I’m partially blaming teeth for this decrease in boob interest. His bottom two came through at the end of May with no trouble (we didn’t even notice until we heard a clanging noise when he bit a metal spoon). His top left cut a few days ago, and his top right is bulging under the gums right now. He has been a fusspot for a few days now, which is wearing me out- both physically and emotionally. Today was particularly difficult. I have been skipping workouts for the past week because of an arm injury and wanted to go to the gym with DW but Dumplin’ was super fussy from the moment he woke up so I chose to stay home with him while she went. I played with him, then when the fussing became too much, I wore him and we walked the dogs. Just as he started to get sleepy, we got home and I tried nursing him in bed… It worked and he nursed until he fell asleep…. For a whole 30 minutes. His naps have been little kitten naps for the past week. He’s been refusing sleep and when he does finally fall asleep, he only sleeps for 30-40 minutes. When he wakes up, I try to offer him the boob, but he’s pushing me away and crying SUPER hard. So we start off waking time with fussing, and it’s been like that for days. Anyways, today I sat with him while he played in the living room, a hot bowl of split pea soup in hand. At some point, he grabbed my bowl, and the piping hot soup spilled all over his little hand. I rushed to the bathroom and ran cool water on the burn, but it’s still red and inflamed hours after the incident. Just a first degree burn, but I feel soon awful. Clearly, my boy is having a rough time- teething, a developmental leap, and now a burn!

Months 5-8 were amazing with Dumplin’- he was super happy all the time and easy-going. I feel like months 8 and 9 have been super challenging for him and for us. I feel like I’m at the end of my rope, and without family to help more often than once a month for a weekend, I’m really starting to feel hopeless as a parent. And then we have Mochi, who is challenging in his own way, and DW is left to care for him almost by herself. We really didn’t think this two-babies-six-months-apart thing through. I was in tears a few days ago, saying to DW that it felt like we were both single-parenting each of these babies because we are so busy that we can’t help each other out. There is no relief. No break until bedtime, and even then, my anxiety prevents me from sleeping well.

In the meantime, I wake up everyday hoping that Dumplin’s back to his happy self, nursing like the avid nurser that he used to be, eating solids as happily as he used to, playing with his toys enthusiastically, and exploring like the smart curious guy that he is.

Mochi has been the opposite of Dumplin’ (in his younger months) in pretty much every single way except for his love of the swing and his love of bed sharing. He is super sweet and chill until he wants something, and when he wants it, he wants it right away- to be fed, changed, if he’s too hot/cold, tired, wants to play, etc. If you wait longer than 20 seconds, he screams at the top of his lungs until you satisfy his needs. It’s pretty comical unless you’re out in public or at a play date like we were yesterday. Dumplin’ was moderately fussy all the time (rather than at specific times) from birth until 5 months old. I basically just gave him a boob anytime he fussed, and it worked most of the time.

Mochi also seems to be growing really fast in length. He’s already wearing twelve month clothes because he’s so long. Dumplin’ also was wearing clothes much ahead of his age, but because of his girth. I made a side-by-side comparison of my two guys at the same age,  and it’s astonishing how different their body types are/were. 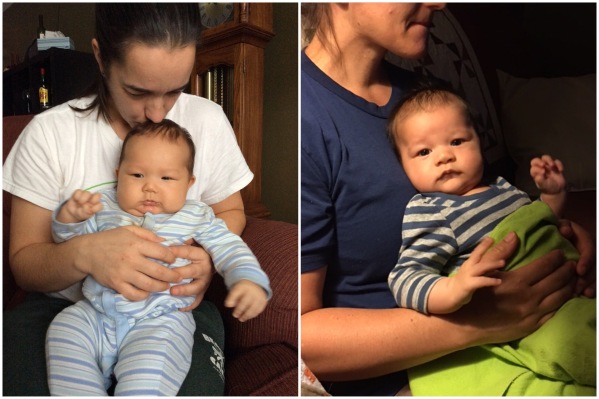 Mochi still spits up a lot, and DW is still off dairy, but he doesn’t have the rash he used to when she was eating dairy. He likes to play on his play mat, swatting at the toys, and cooing at his own reflection in the mirror. He is starting to roll side to side, and rocks tummy time. He’s sitting up with assistance, and can sit up on his own in the Bumbo. He loves watching his big brother, and smiles and coos at him a lot. Dumplin’ also loves his little brother, grabbing his hands and feet to hold them. It’s really sweet to watch, and makes me think having two is worth it for moments like these.

6 thoughts on “Dumplin’ and Mochi: 9 Months and Almost 3 Months”