Hi folks, I’m sorry that I haven’t been posting as much lately, but I have been feeling like garbage. This week has been a real shitshow in terms of nutrition, thanks to the pregnancy sickness that started a couple of days before six weeks. It started off as random food aversions, and then more aversions and bouts of dry heaving started, and now I am basically grossed out by all food. It’s worse when I prepare food, so in order to survive, I’ve been dining and grabbing take out a lot more than usual.

I’m not as exhausted in the afternoons now, which is nice, and I haven’t been napping all week. I do have a mild headache in the afternoon and evenings, which when combined with the nausea, makes me feel super hungover (without the fun night before).

I am eating though, even if it is a battle, and I’m trying to include as many healthy items (protein and veggies) as I can to offset the bad things that I seem to enjoy right now, like popsicles, lollipops, and juice (sugary things that I normally never eat).

I turned 33 this week, and celebrations were very chill, as I wasn’t feeling very well with the UTI symptoms (that didn’t end up being a UTI). My in-laws drove down to take DW and I for lunch for our birthdays. We went to a very nice Italian restaurant that does gluten-free substitutions for their pastas and pizzas. I had my favourite pizza there, with prosciutto di parma, figs, arugula, mascarpone and grano padano cheese, and a drizzle of honey. 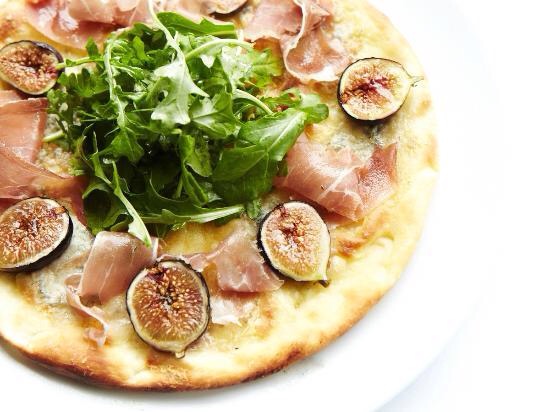 The pizza was delicious, but I struggled  with nausea during the car ride to the restaurant, as well as towards the end of our lunch, because I devoured the entire pizza (in comparison, DW only ate half of her pizza). When we got back to our house, my MIL surprised me with homemade gluten-free brownies, which were delicious. I felt bad because I didn’t feel much like eating again after our car ride, but I froze them so that I can enjoy them once my appetite returns. I thought it was super sweet of her though.

The weather has warmed up a bit here, which has been nice for my mood, but terrible for keeping the dogs clean. DW has started some plants from seed, and they are now doing very well under the grow-lights. We’ve got leeks, green onions, eggplant, peppers, and lettuce going right now. Other plants will be started in a couple of weeks. Mid-May, we start considering putting them in the ground.

Other than that, not much is new. I am so grateful that the bleeding stopped and has not returned. I sometimes feel a fluttering near my left ovary area. I suspect that the little Dumplin’ may have implanted on the left. It has almost been two weeks since my last ultrasound (5w3d) where the tech saw the gestational sac and yolk sac, and I’m anxious as hell to see a heartbeat on Monday (7w3d). This has been the longest two-week-wait yet. I feel like I have been perceiving this time as an extension of my original two-week-wait, because of our previous loss which happened at around 7-8 weeks (but the embryo stopped developing a week earlier than that). I haven’t allowed myself to celebrate this pregnancy yet because my body has shown that it can be fooled into continuing to carry a pregnancy that has already stopped. That’s why this next ultrasound is so important to us.

However, I do appreciate the support from all of you, and your happiness for me is helping me to believe that this will work out. In particular, I received this lovely card in the mail from Alicia at Ladyloveandbabydust! 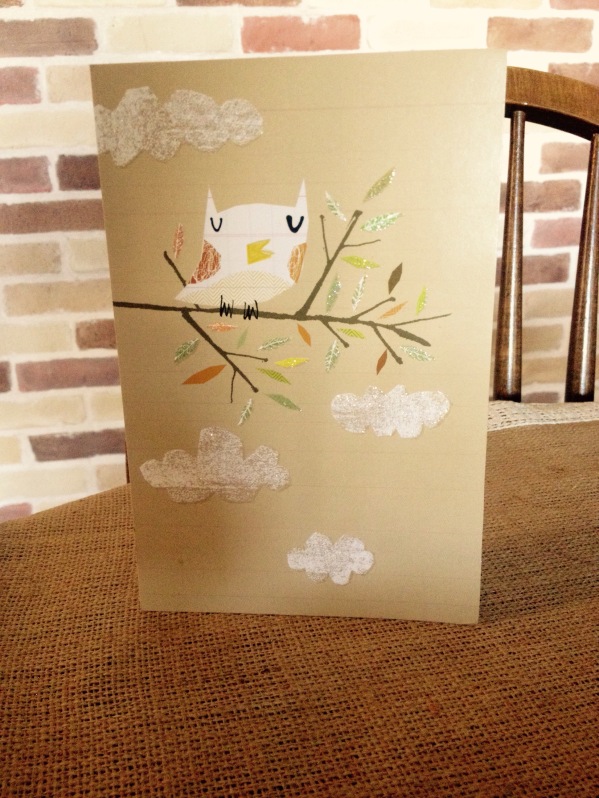 It actually arrived on my birthday, but I was thrilled that it was to celebrate my BFP! ﻿I feel like this baby would be the best birthday present ever.

In other news, after finding out that the midwifery practice in our region was fully booked, I went out on a limb and contacted 4 neighbouring midwifery clinics. All of the clinics explicitly say on their websites that they will not service residents outside of their catchment areas, but I sent in applications anyway. One by one, I heard back from each clinic, them reiterating that they could not accept me because I lived outside of their catchment area. Keep in mind, that for two of these clinics, I am outside by only one major street. Then, two days ago, I heard back from the last midwifery clinic, which is located the furthest distance away (technically two cities away), accepting me for an appointment next week! There are two hospitals near us, and they have privileges at the one a little further away. This hospital is the same one that my endocrinologist and RE are affiliated with, and the same one that I had my D&C at. Anyways, I’m so excited to meet our midwives on Tuesday! Last week I asked my family doctor whether she thought I should go with a midwife or an OB, and she said that a midwife would align more with my personality and needs. She said of course, that’s if everything goes well and this is deemed a low-risk pregnancy at the time I’m discharged from the fertility clinic.

I can’t wait until Monday, when hopefully we get to see the little Dumplin’s heartbeat. I hope she is thriving as expected, and that me and her Maman can finally stop holding our breaths.

In the meantime, little Dumplin’s furry sisters are on guard. 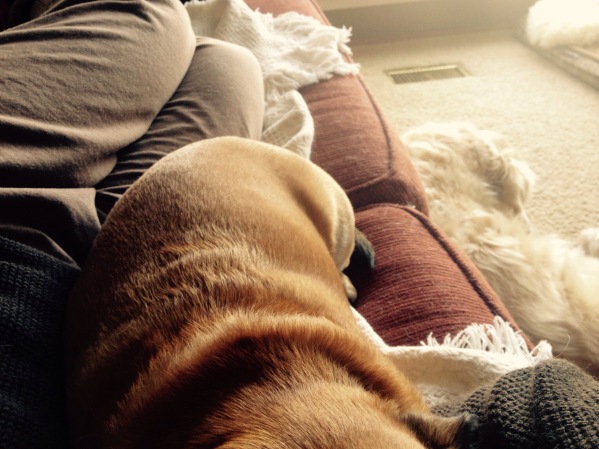 Despite being off the progesterone for two days now, it seems that my HCG continues to rise, and that this morning sickness just won’t quit.

Let me paint you a picture:

Wake up. Take my Synthroid with a full glass of water. Smell the faint trace of chlorination in the water, gag a little.

Dry heave. (I must be hungry).

Go to the kitchen, with intentions to make a healthy breakfast. Open the fridge to find inspiration. Become overwhelmed by the variety of potential aromas.

Decide to make a Non-Oprah chai tea latte to go with my salted caramel apple cupcake (since I have been depriving myself of caffeine since the beginning of this FET). Open the carton of lactose-free milk, imagine the musk of the udder that it was milked from, nearly hurl. Continue to steep tea and steam milk anyway. 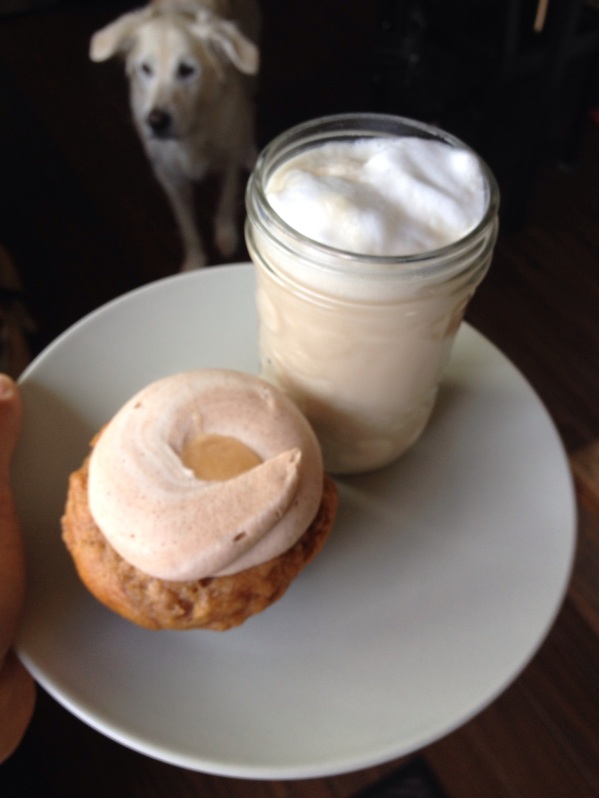 Bring my latte and cupcake outside to encourage the forced eating process a little bit. Split the cupcake in half to sandwich the icing. Lick my fingers that are covered in icing, taste too much coconut oil in the icing, almost hurl.

Scrape off icing and eat cupcake like it’s a muffin. Accidentally drop crumbs on the ground so that there is less volume for me to eat. (Dogs circling like sharks). Take so long to eat it that I am able to watch the melting of the vegan buttercream icing into a sloppy mess.

Chug my latte while pinching my nose closed.
——————————————————–
I don’t know if I can wait for this miscarriage to happen on its own. These symptoms plague me, and are not the happy reassurance that they once were.

Now, excuse me while I puke.