Geeze, it’s been about a month since my last post. Sorry about that. It’s been really busy for us lately. I’m thinking it’s the beginning of busy for the rest of our lives…

Anyways, things are better. We struggled a lot with sleep until about a week ago. Dumplin’ would sleep all day and then be wide awake and needing active attention (read: the swing of neglect would not do- he wanted active bouncing on the exercise ball), basically from 11pm to 5am. It was horrid. We were so sleep deprived and ended up having to take shifts entertaining him over the course of the night. You can imagine how difficult this was for DW, who was suffering from pregnancy exhaustion AND working full-time. It kinda set me down a dark road too… And had me googling Lexapro again, thinking that maybe I was in the haze of post-partum depression/anxiety. Then last week, my in laws came to visit and stayed for about half a week. We took Dumplin’ to the One of a Kind Show, which is basically a craft and art fair, where artisans sell their stuff. We go every year, and I seem to buy the same stuff every time: a gluten-free cranberry bread pudding from Cranberry Creek (this stuff is deadly good), t-shirts from Whiteout Workshop, and usually one other unique piece of clothing (I love stuff made by Melissa Bolduc). This year, we also got some delicious toffee from Sweet Truth Candy as Holiday gifts for DW’s coworkers.

Also, while her parents were here, I finally went back to the gym. I was 1 day short of being 6 weeks post-c-section, and had been feeling ready to return probably 2 weeks prior to that. It was glorious! I distinctly remember a feeling of happiness washing over me as I entered the gym. Seriously, people, my attitude took a 180. I did a leg and back workout, and it felt amazing. My core is shot, so I couldn’t lift as much weight as I was at 37 weeks (yay for record keeping!), but I focused instead on mindful reps and good form. And let me tell you, 5 days later and I still feel sore from it! The tricky thing about going back to the gym though, is that the sand in the hourglass starts falling as soon as I last nurse Dumplin’. Basically 2 hours later, my boobs become engorged and start leaking, and I imagine he’s having a fit back at home. I’ve been pumping too, so there’s always something for him to eat, but it still kinda messes up the supply-demand feedback. But I’m hoping to be able to hit the gym in the late afternoons when DW is home from work. I’ve already been twice this week. I was supposed to go again yesterday, but I was feeling really fluish, chills and achey all over, which I think was mastitis because I also had a really sore lump in my right breast. Dumplin’ and I have been trying to open up the clogged duct, but no dice yet. I’m reconsidering this pumping thing now, because I worry that it’s causing an unbalanced supply, and the potential for more clogged ducts.

As for Dumplin’, he started sleeping a lot better as of last week. We have started a bedtime routine at 7pm: diaper change, bath, story, bed. We’ve been swaddling him, and he’ll sleep for about 6 hours with one or two nursings in between. Then there’s a wakeful period (read: screaming and mommy hell… Back on that exercise ball…. Bounce bounce) and then he sleeps for another 3 or so hours.

I’ve noticed that he sounds super congested all the time, despite us sleeping with a humidifier running in the room. He’s also spitting up a lot, and sometimes pukes if he’s overfull. Little bugger loves to eat. My guess is that he’s eating about 6oz of milk at each feeding. At 6.5 weeks old, he already weighs 13.5lbs! That’s in the 95th percentile. What a chunk!

The first trimester haze has worn off now for DW. She’s feeling more energetic, and much less nauseous. She still gets heartburn from greasy foods, and is still loving pasta and Indian food. Last week we got to see Mochi, and what an active little fetus Mochi is! At Dumplin’s anatomy scan they could barely get him to turn around. We got to see Mochi kick, flail his/her arms, and yawn. And no- we don’t know if Mochi is XX or XY. We’re saving that for the birth! 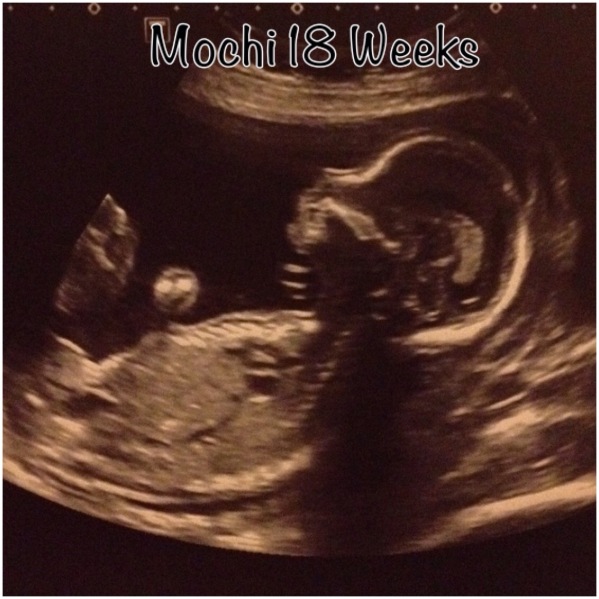 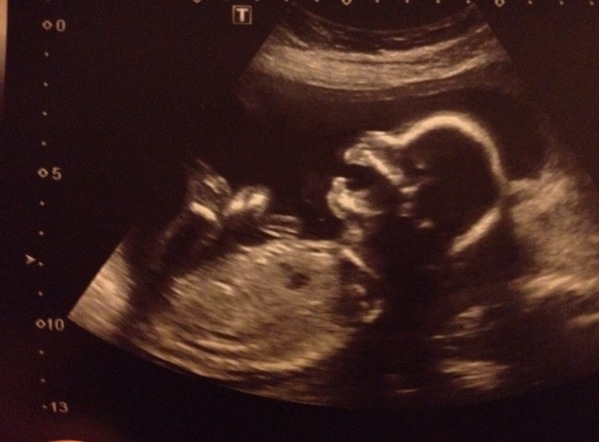 And here are some Dumplin’ pics to make up for lost time: 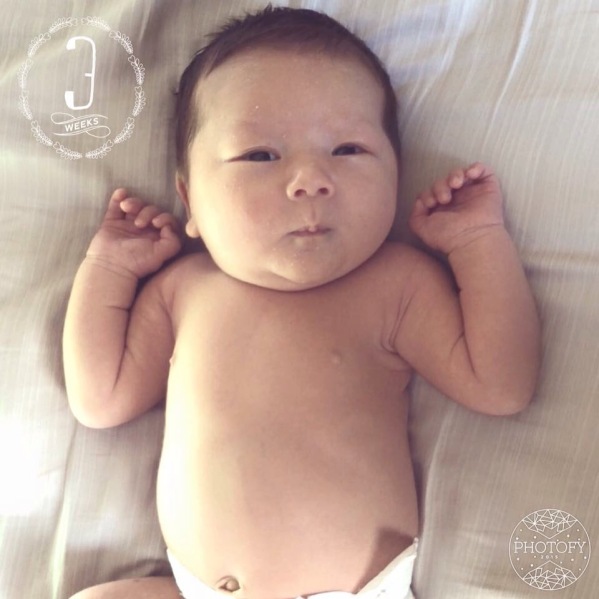 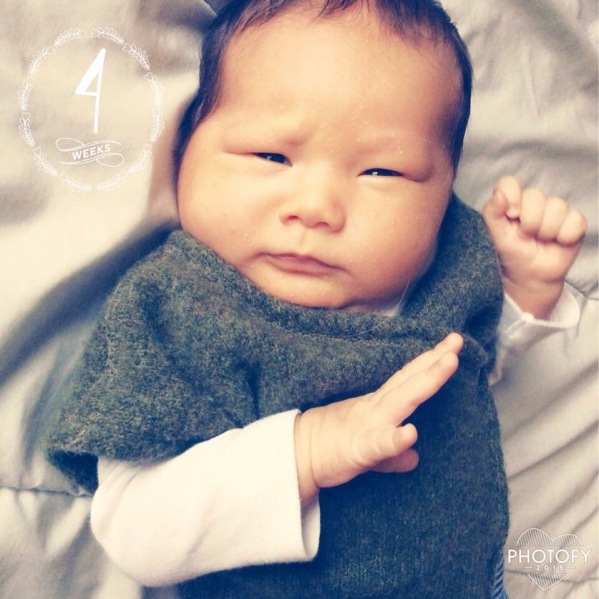 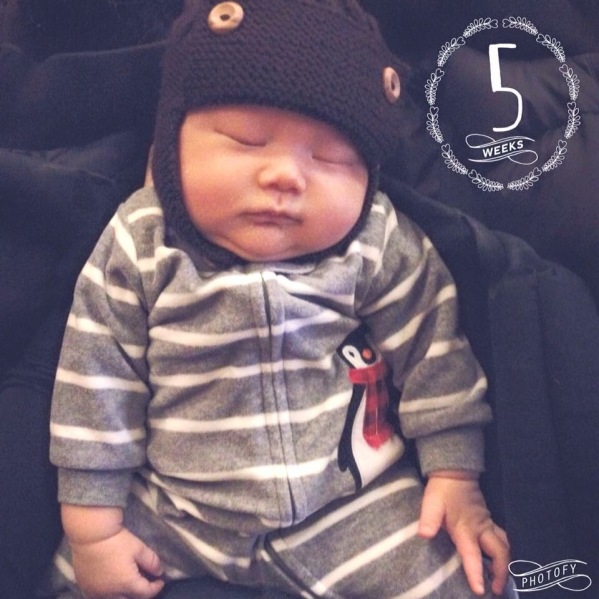 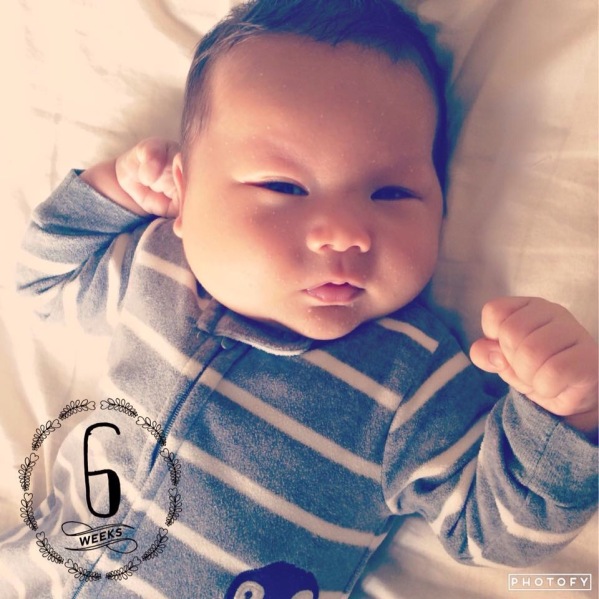