I have the flu. In fact, I have more than the flu. I have some kind of super-mutated-unrelenting-hypervirulent-knock-you-off-your-ass-for-two-weeks flu.

It made me leave our spa day this past weekend dizzy and nauseous.

It made me have to sit out a precious game of ball hockey. (I say precious because I’m so sad to have to give it up once pregnant, that I started counting down the games I might have left… This leaves me at one last game.)

It has made teaching excruciatingly painful, hot (in a bad way), and dealing with students annoying.

Yet…. I decide to place possibly one of the most important orders of our future baby’s life.

I filled out a form, indicated the donor number and quantity of washed vials, and paid for the sperm that will hopefully make up the other chromosomal halves of this bebe.

We picked this sperm because it was pretty and had a nice chest.

Helps that it’s somewhat smart, athletic, comes from a family with good health, and has the same colouring as Darling Wife.

I choose to describe the sperm as it because it’s not him that going to make our baby, it’s DW and myself.

Though, I’m endlessly grateful for all of the men who continue to donate sperm so that loving people such as ourselves can build families too.

So here we are. The first cycle of trying.

I haven’t been posting much recently because I’ve been kind of angry. We’ve been put through a bunch of monitoring and testing at the RE clinic, but haven’t been able to get an appointment with the doctor himself to get the ball rolling with the IUI. In fact, they are so busy that we won’t be seeing him until the last week of May, missing nearly 2 perfectly good cycles.

So, fed up and annoyed, I decided to take matters into my own hands. Don’t worry, I didn’t do anything illegal. Heh.

So two weeks ago, I approached my family doctor and laid all the cards out. I confirmed that all of the tests showed I was ovulating normally, and that all of parts were open and clear. I told her that we couldn’t get sperm delivered to our home, and wondered if she would be willing to receive it at the clinic. I also asked if she would impregnate me with an IUI kit that I could buy for ten bucks…..

So right now, I’m on day six of my cycle, and I’m waiting for some of my “early signs” (cervical mucus). As soon as I get that, I’m calling the sperm bank, having them ship the stuff to my family doctors office. Then I just keep peeing on LH sticks until I get a positive, and then call my family doctor to make an appointment to get knocked up the next day!

Fingers crossed it all goes well.

Blame it on the B6, or the red raspberry leaf tea, but not on FF.

It seems that my ovulation occurred earlier this past cycle, perhaps due to some of the herbals that I’ve introduced. Previously, I had been o’ing on day 26, and this past month, I ovulated on day 19-20. This was detected via blood draw and confirmed on day 20 with a temperature spike on my BBT.

I am finding all of this very interesting, especially as we are getting closer to actually trying soon!

My bathroom is cluttered.

There are bottles everywhere, unlabelled, with strange concoctions in them.

In my shower, I have a glass bottle of “Kombucha”, except that it isn’t really Kombucha, but rather an apple cider vinegar and water mixture. I also have a glass jam jar of coconut oil, and a ziplock protecting my peppermint shampoo bar and my African black soap.

I’ve been making the switch over to simple and pure (lacking in harmful chemicals) beauty and hygiene products for some time now. I’ve done a lot of research on the toxicity of common body care products on ewg.org and have been purging and replacing items with natural or homemade solutions. It’s been fun and I’ve been enjoying not spending a whole lot of money on the expensive things that I used to buy- Aveda products mostly.

What we need is a bigger bathroom with more storage I think.

Until then, I suppose I’ll try to keep the unlabelled bottles tidier. 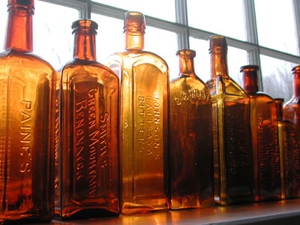 Fertility Friend has been lying to me for the past three months.

She told me CD26, and I believed her. My bloodwork told me otherwise. It told me CD19.

Those two days aren’t even close! It’s not even a white lie.

Fertility un-friend. Tomorrow, I give her a chance to explain herself. We’ll see if my body temp spikes overnight.

I don’t have problems admitting when I’m wrong. Though, it does sting like a B when it’s about something I’ve ranted about.

I’ll give you an example:

For the past 3 cycles, I’ve been charting my BBT, and during each cycle, Fertility Friend (an app) tells me that I’m ovulating on CD26 of my 36 day cycle.

Since we’ve started our monitoring cycle, I’ve been going in every other day to have bloodwork and ultrasound done. This is how it’s gone:

I had a melt down.

Not a “fix my problems for me” meltdown, but rather, a “I’m bitching just to bitch” meltdown. I’ve been having a lot of these lately because I’m so stressed at work.

Anyways, I felt like an ass, because Darling Wife always wanted to be “the one to get pregnant”. But timing-wise and financially, it makes more sense for me to be the host body.

So I get to work after all my venting, teach 2 classes, help students during my lunch, teach another class, attend a staff meeting, clean up some lab chemicals, check my phone when I notice that I have a voice message.

It’s from my monitoring nurse.

She tells me that my lab results came in from today’s bloodwork, and it turns out that I’m starting to ovulate.

Best part is, that she cancelled all of my monitoring appointments, and the next time I go in is next Monday. Yippeee!

Being lesbians immediately excludes us from the set of those lucky enough to become accidentally “knocked up”.

I find that term hilarious by the way. It conjures images of recklessness and unfortunate bobble-heading, peppered with some Seinfeld “little kicks” rhythmics.

Regardless, unsexy any way you look at it.

My own mother got “knocked up”, and had the stereotypical shotgun wedding. I did the math when I was in grade 1, and being the typically overly mature and insightful daughter of neglectful parents, I wasn’t surprised that I was unplanned.

In fact, this realization brought more clarity to my strong suspicions that my parents resented having to be parents.

My father was (and still believes that he is), a playboy. His narcissism led him to have many extramarital romances, which essentially turned my mother into what I believe to be a very dense ball of resentment.

Even nearing 60, she is unable to unclench her hypertrophic grip on the past, and I believe that as a result, is cutting off her nose in spite of her face.

This manifests itself in many additional ways that have always and continue to hurt my sister and I.

Recently, I had a conversation with my mother about my darling wife and I beginning the process of trying to conceive. Despite my obvious excitement, her response was a mere “Okay.”

A flood of emotions came over me, and I was both deeply hurt and horribly angry. I am less angry now, but still incredibly hurt.

It makes me feel unloved, unsupported, and reminds me that I was unwanted.

I try to put myself in her shoes, which makes me realize that the smoke of her past is so thick, that it blinds her from seeing the future. It prevents her from dreaming of the love of her future grandchildren. A love that can heal her…

… the antidote that I can never be, because I am his spitting image. I am the poison transformed, with an undeniable resemblance.

I am the scar left after the wound heals, except that in her case, it has yet to heal.